This contest has ended. The winner will be announced shortly! 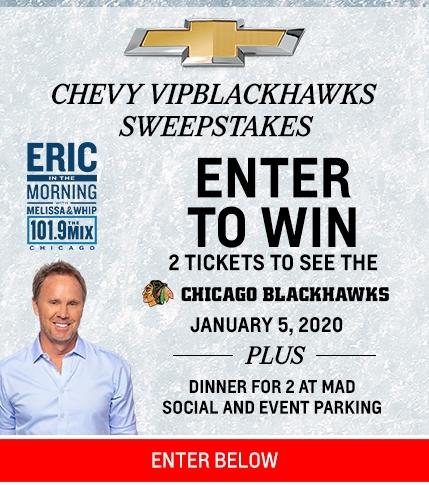 No purchase necessary to enter or win. Void where prohibited. The purchase of any products from affiliated parties will not increase chances of winning.

2. ADMINISTRATOR AND SPONSOR. The Sweepstakes is sponsored and administered by Chicagoland and NW Indiana Chevy Dealers, 1025 West Everett Road, Lake Forest, Illinois 60045 (“Sponsor” or “Administrator”). The prize shall be provided by The Mix 101.9 of Chicago, owner and operator of radio station The Mix 101.9 FM, 130 E Randolph St Suite 2700, Chicago, IL 60601 (“Prize Provider”).

3. AGREEMENT TO THE OFFICIAL RULES. By participating in the Sweepstakes, all entrants fully and unconditionally agree to accept these official rules (“Official Rules”) and the Sponsor’s decisions which are final and binding in all matters related to the Sweepstakes. Winning a prize, as described below, is contingent upon fulfilling all requirements set forth herein. By accepting a prize, winner acknowledges compliance with these Official Rules. Failure to comply with these Official Rules may result in disqualification. The Sponsor reserves the right, in its sole discretion, to disqualify any individual suspected of tampering with the entry process or the operation of the Sweepstakes; or acting in any manner deemed by the Sponsor to be in violation of the Official Rules, unsportsmanlike, disruptive or with intent to annoy, abuse, threaten or harass any other person. CAUTION: ANY ATTEMPT BY A USER OR ENTRANT OR ANY OTHER INDIVIDUAL TO DELIBERATELY DAMAGE ANY WEBSITE OR UNDERMINE THE LEGITIMATE OPERATION OF THE SWEEPSTAKES IS IN VIOLATION OF CRIMINAL AND CIVIL LAWS. SHOULD SUCH AN ATTEMPT BE MADE, SPONSOR RESERVES THE RIGHT TO SEEK DAMAGES AND COSTS (INCLUDING WITHOUT LIMITATION, ATTORNEYS’ FEES) FROM ANY SUCH PERSON TO THE FULLEST EXTENT PERMITTED BY LAW.

4. TO ENTER. You may only enter the Sweepstakes online. No other method of entry will be accepted. You may enter the Sweepstakes through the website URL at www.chevydriveschicago.com/sweepstakes/chevyvip during the Sweepstakes Period and enter your information: first name, last name, phone number, e-mail address, street address (including city, state, and zip code), in the official registration area, located on the homepage. Entrants must complete and properly submit the online form. Incomplete or inaccurate online entries are void. After successfully transmitting a completed online entry form as directed, a confirmation will be displayed. Entries must be received within the Sweepstakes Period. Received entries become the property of The Chicagoland and Northwestern Indiana Chevy Dealers and will not be returned. Limit one entry per person and physical address. Additional entries beyond the specified limit will be void.

5. ELIGIBILITY. The Sweepstakes is offered and only open to U.S. legal residents living in Illinois, Indiana, and Wisconsin, who at the time of entry, have Internet access and are 18 years of age or older. Employees, directors, and officers of Sponsor, Prize Provider, and their respective parent, affiliates, subsidiaries, suppliers, advertising and promotion agencies, other radio stations in the Chicagoland market, and those individuals’ immediate families (husbands, wives, brothers, sisters, parents and children and their spouses) and household members (whether or not related) of each are not eligible. The Sweepstakes is void where prohibited by law and outside the Sweepstakes area set forth above.

6. PRIZE. There is one prize category for the Sweepstakes. There will be one grand prize winner and he or she will receive one grand prize package, consisting of two tickets to the Chicago Blackhawks hockey game Sunday, January 5, 2020, at the United Center in Chicago, IL, and dinner for 2 at Mad Social Restaurant. The grand prize package’s approximate retail value (“ARV”) is $615 for the total grand prize package. The Sponsor reserves the right, in its sole discretion, to substitute a prize of equal or greater value if the prize becomes unavailable. These terms and conditions of the tickets awarded as part of the prize shall govern in the event that the game is delayed or cancelled due to circumstances beyond the control of the Sponsor because of weather, an act of God, an act of terrorism, civil disturbance or any other reason. Winner and his/her guests agree to comply with all applicable ticket regulations in connection with the prize. Prize may not be resold or offered for resale, and is non-transferable and cannot be exchanged for cash. Any such resale may result in disqualification and prize forfeiture, and may invalidate the license granted by the tickets. The prize tickets shall be valid only on the date printed on the tickets and will not be replaced if lost or stolen.

7. SWEEPSTAKES GIVEAWAY AND NOTIFICATION OF WINNER. A random drawing will be held among all eligible entries received by The Chicagoland and Northwestern Indiana Chevy Dealers on or around December 19, 2019 by an employee whose decisions are final with respect to all matters relating to the Sweepstakes. The odds of winning the prize depend on the number of eligible entries received. Prize Provider will attempt to notify the winner by phone or e-mail (as provided on entry form) on or around December 19, 2019 Any prize notification returned as undeliverable/invalid phone number or e-mail address will result in awarding of the prize to an alternate winner. Winner has 48 hours to respond to prize notification. Failure to respond will result in forfeiture of the prize and an alternate winner will be drawn. Potential prize winner must sign and return any required Affidavit of Eligibility/Prize Acceptance Form and a liability/publicity release at time of claiming the prize. If the potential winner are found to be ineligible, or if he/she does not comply with the Official Rules, such potential prize winner and his/her entry will be disqualified and another potential prize winner will be selected from the remaining eligible entries received (time permitting). Noncompliance within this time period will result in disqualification and an alternate winner may be selected by random drawing from remaining eligible entries (time permitting). Winner is responsible for all costs and expenses associated with the applicable prize, including, but not limited to, transportation, meals, and parking. All federal, state, and local tax liabilities arising from the prize awarded in connection with the Sweepstakes are the sole responsibility of the respective winner. Winner agrees to provide, name, address, and social security number prior to acceptance of prize.

8. GENERAL CONDITIONS. By entering this Sweepstakes, each entrant agrees to defend, indemnify and hold harmless Sponsor, Prize Provider, the Chicago Blackhawks, Search Optics USA LLC, Facebook, Inc. and their parents, affiliates, subsidiaries, suppliers, and participating retailers, and all of their shareholders, agents, and employees (collectively, “Released Parties”) from any and all liability, damages or causes of action (however named or described) with respect to or arising out of participation in this Sweepstakes or out of the use of the prize awarded herein. Released Parties are not responsible for lost, late, incomplete, stolen, inaccurate, misdirected, delayed, undelivered or garbled entries or failures or difficulties, or other errors of any kind whether human, printing, typographical, mechanical, telephonic, electronic or network relating to or in connection with this Sweepstakes, including, without limitation, errors which may occur in connection with the administration of the Sweepstakes, the processing of entries, the announcement of the prize or in any Sweepstakes-related materials. Released Parties are also not responsible for any incorrect or inaccurate information. Persons who tamper with or abuse any aspect of the Sweepstakes or who are otherwise in violation of these Official Rules, as determined by the Sponsor in its sole discretion, will be disqualified. Should any portion of the Sweepstakes be, in the Sponsor’s opinion, compromised by non-authorized human intervention or other causes which, in the opinion of the Sponsor, corrupt or impair the administration, security, fairness or proper play, or submission of entries, the Sponsor reserves the right at their sole discretion to suspend, modify or terminate the Sweepstakes (or such portion) and select the potential winner from all eligible, non-suspect entries received prior to its awareness of such suspected action. If Sponsor does so, Sponsor will announce its action on the Sweepstakes entry page. Entrants, by participating, agree that the Released Parties will have no liability whatsoever for, and shall be held harmless by entrants against, any liability, for any injuries, losses or damages of any kind, including death, to persons, or property resulting in whole or in part, directly or indirectly, from acceptance, possession, misuse or use of the prize or participation in this Sweepstakes, including any travel or activity associated herewith. The Released Parties make no representations or warranties of any kind whatsoever concerning the appearance, safety or performance of the prize. Except where prohibited, by entering the Sweepstakes, each entrant agrees that: (1) any and all disputes, claims and causes of action arising out of or connected with this Sweepstakes or the prize awarded shall be resolved individually, without resort to any form of class action, and exclusively by state or federal courts situated in Chicago, Illinois; (2) any and all claims, judgments and awards shall be limited to actual out-of-pocket costs incurred, but in no event shall such costs include attorneys' fees; and (3) no punitive, incidental, special, consequential or other damages, including, without limitation, lost profits may be awarded (collectively, “Special Damages”), and (4) entrant hereby waives all rights to claim Special Damages and all rights to have any damages awarded multiplied or increased. Some jurisdictions do not allow for limitations on the ability to pursue class action remedies, or certain kinds of damages, and so these limitations may not apply to you. Illinois law governs the interpretation and construction of these Official Rules and all aspects related thereto. By participating in the Sweepstakes, entrant understands that he or she is providing his or her information to the Administrator and not Facebook. Further, entrant specifically agrees to release Facebook from any and all liability associated with this Sweepstakes. The Sweepstakes is in no way sponsored, endorsed or administered by, or associated with, Facebook.

9. PUBLICITY RELEASE AND USE OF DATA. The winner, by acceptance of the prize, except where legally prohibited, grants permission for the Sponsor and its designees to use his/her name, address (city and state), photograph, voice and/or other likeness and prize information for advertising, trade and promotional purposes without further compensation, in all media now known or hereafter discovered, worldwide, and on the Internet and world wide web, in perpetuity, without notice or review or approval. Winner’s name may be included in a publicly available winner list. Information collected from entrants is used by the Administrator for the purpose of the prize drawing and to notify winner. The Administrator and its affiliates may also send participants additional information and promotional material relating to products and services.

10. WINNER NAME. For the name of the winner, please send a self-addressed, stamped envelope, labeled “Chevy VIP”, to 1025 West Everett Road, Lake Forest, Illinois 60045 Requests for winner’s name must be received by December 26, 2019.